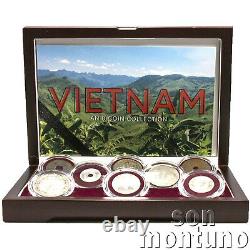 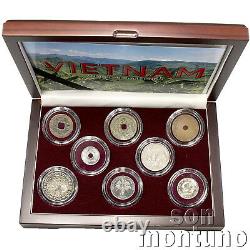 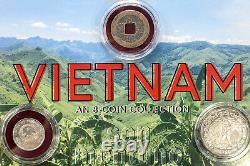 Coins are encapsulated and presented in wood box with story card and certificate of authenticity. All coins are examined, genuine and certified. To fully understand the Vietnam War, we must cast it in the proper historical context. Once a Chinese territory, Vietnam became independent in 939 CE and remained so until its colonization by the French in the mid-19th century. France divided Indochina into five protectorates: Cambodia, Laos, Cochinchina, Tonkin, and Annam-the last three comprising today's Vietnam. Years of harsh colonial rule made a strong impression on Ho Chi Minh, a member of the Socialist Party of France and one of the leaders of the Vietnamese nationalist movement that sprung up in the 1930s. Ho was a useful asset for the American OSS during the Second World War, when Indochina was occupied by the Japanese, and hoped that his service would be rewarded with his nation's independence. This did not come to pass. France held Indochina until its humiliating surrender to Ho's forces at Dien Bien Phu in 1954. The country was subsequently divided, with Ho's Communists holding the northern provinces of Annam and Tonkin, and U. Backed strongman Ngo Dinh Diem establishing the Democratic State of South Viet Nam in Cochinchina. Washington perceived Ho as a Soviet puppet. If Vietnam fell to the Communists, the thinking went, there would be a "domino effect, " and the U. Would control the entire region. Thus South Viet Nam was to be defended at all costs. This hard-line position was U. Foreign policy under Eisenhower, Kennedy, Johnson, and Nixon. Ho did not see it that way. To him, nationalism trumped political ideology; the United States, like France before it, was nothing more than an agent of colonial oppression. As he would later explain: It was patriotism, not Communism, that inspired me. He wanted a unified country, as had been promised at the peace accord after Dien Bein Phu, and was willing to sacrifice whatever it took to get it. "You will kill 10 of our men, and we will kill one of yours, " Ho remarked, and in the end it will be you who tire of it.

Ho's prediction came true. The United States withdrew its troops from Vietnam in 1973, after fighting for more than a decade. All told, some 1.6 million human beings were killed in the Vietnam War, and millions more were injured or MIA.

Two years later, the Viet Cong took Saigon, the Southern capital. The North subsequently absorbed the South into the Socialist Republic of Viet Nam. Le Duan, who succeeded Ho Chi Minh after the latter's death in 1969, imposed a Mao-style collectivist system that destroyed the economy and impoverished much of the country. The ideology was different, but the effect on the population the same as under French rule. Only in the 21st century, with the adoption of a more Western economic system, has Vietnam found its place as an ascendant nation.

Features Communist coat of arms. Coins are protected in archival capsules and beautifully displayed in a wood box. Accompanied with a story card and certificate of authenticity. Please note that we have more than one of these sets available.

Photos are examples of the quality of coins you will receive. Please see our other listings for more great coins & treasures. This item is in the category "Coins & Paper Money\Coins: World\Asia\Vietnam". The seller is "son-montuno" and is located in this country: US. This item can be shipped worldwide.