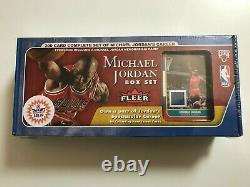 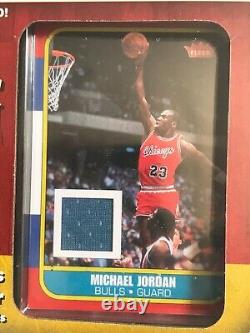 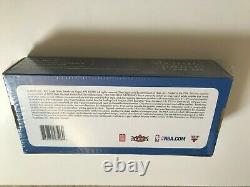 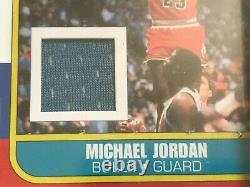 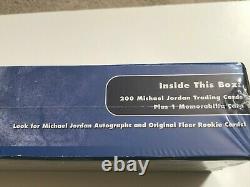 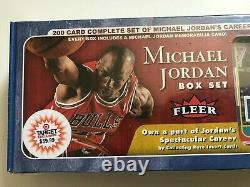 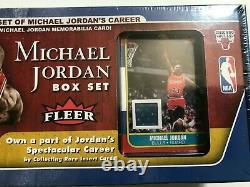 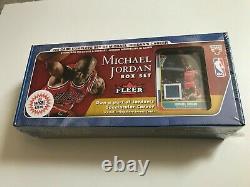 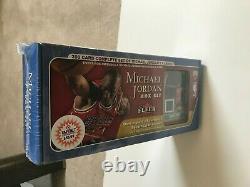 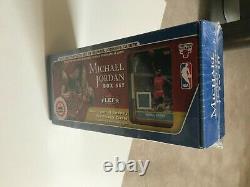 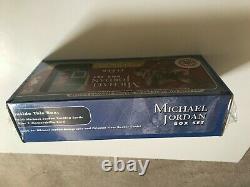 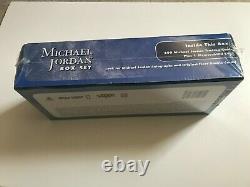 I remember going to Target to hunt down these sets. The majority of sets featured the 1986 Fleer designed Michael Jordan Card #57 Rookie Card, licensed replica card with the "Memorabilia" game used relic showing exactly what card you'll get on the top of the display box. The majority of the sets featured the plain brown hardwood floor, a piece of the basketball court that Michael Jordan played on, game used. However, as I had to go to many Target stores, I found the most rare variations of this Memorabilia card was the ones that featured two colors of the hardwood floor where you can see the paint stripe areas for 2 tones on the game used floor embedded onto the memorabilia card. The other hard to find memorabilia cards were the the ones that featured a piece of Michael Jordan's game worn basketball jersey's that generally came in a white cloth and a blue cloth (Washington Wizards jersey color) from what I've seen.

I don't think any Chicago Bulls memorabilia was used for this set, as I've never seen red nor black relics. This is a JERSEY CARD, the most elusive and desirable of the relics. The Game Used Floor is awesome as it's unique and something that is closely related to Michael Jordan with him having played on the hardwood... However, the JERSEY CARDS are even more important and directly personally related to Michael Jordan is its something he actually owned and wore. This is SEALED BRAND NEW, so you get a chance to open this up and know that every card in the box has not been touched or handled and are prime candidates for grading to garner a PSA or BGS 9, 9.5 or 10 Gem Mint to Pristine high grade, which commands the most investment potential value.

The box also states Look for Michael Jordan Autographs and Original Fleer Rookie Cards! However as most know or an assume those were very treasured items then in 2007 and even more so now in 2021. There were no stated ratio or odds on the chances to get the insert chase cards mentioned.

I'd speculate a longshot, but with a sealed new box, your chances were and are as good as anyone elses in 2007, so you never know if you open up this box and find an autographed Michael Jordan basketball card or better yet, open this up to reveal a 1986 Fleer Basketball Card #57 Michael Jordan's rookie card! There is a chance'tho since this is sealed new. The sets with the general brown hardwood floor goes for less, then the ones with the multi-color 2 color game used floor are higher as well as the jersey cards, which are the ones that command the highest prices, then if the box is sealed brand new, unopened it carries an even higher premium. This is the ultimate version because it has a colored jersey.

All Items are Sent via U. Postal Service unless otherwise described. I do prepare and handle my packages, using very sturdy oversized packaging materials to protect your item during transit so it is delivered sturdy and secure for you to enjoy quickly in collectors investment quality condition. In turn, I leave glowingly POSITIVE high praise feedback to buyers as well of course! This package may be oversized, so include the address where you want this item delivered to.

Don't Sleep On This One.. THOSE WHO TRY TO SNIPE, AND. DON'T DELAY ONLY TO FORGET OR GET OUTBID!! GO FOR IT NOW IF YOU REALLY WANT IT!! Treat Yourself to Something Special...

This Also Makes The Perfect Gift for a Friend, Family Member or Loved One. This Item can be sent and delivered DIRECTLY to any address. You Provide the address and I'll send it there! One Stop Shopping, Hassle Free and Convenient! THIS ITEM HAS BEEN CAREFULLY STORED IN A NON-SMOKING and PET-FREE ENVIRONMENT TO MAINTAIN ITS COLLECTOR'S ITEM INVESTMENT QUALITY CONDITION AND HAS BEEN STORED IN THE BEST POSSIBLE MANNER TO PRESEVE IT'S ORIGINAL CONDITION (AS DESCRIBED ABOVE).

If you have any questions or concerns, please feel free to contact me. The scan below is of low-resolution and may or may not be cropped and incomplete to fit my scanner, so please read the text above for full details.

The image is provided to furnish you with a visual picture and general idea of how this item looks and what this item is. The item "2007 Michael Jordan Box Set 1986 Fleer Memorabilia Card GAME USED Factory Sealed" is in sale since Wednesday, March 31, 2021. This item is in the category "Sports Mem, Cards & Fan Shop\Sports Trading Cards\Basketball Cards". The seller is "investmentqualitycollectibles" and is located in San Francisco, California. This item can be shipped worldwide.